RICHMOND HILL – From the most pressing issues in Canadian golf news, to thought-provoking profiles and jealously-inducing travel logs, the best in Canadian golf writing, photography and multimedia was showcased this past Monday at Summit Golf Club.

This year, the Golf Journalists Association of Canada (GJAC) held its annual general meeting and awards banquet in conjunction with the RBC Canadian Open. The writing award winners were a mix of first-timers and veterans. Prizes were handed out in the following categories: Feature, Profile, Column and Travel. Five prizes for Photography were also awarded in two categories (Landscape and Action). And, for the first time, acknowledging the ever-changing nature of the golf journalism world, prizes were awarded in a Multimedia category.

SCOREGolf was once again the big winner. The magazine's stable of writers, columnists, and Multimedia teams took home nine awards. SCOREGolf'sEditor, Jason Logan, was the individual Member who took home the most hardware. He won First Place in the Profile category for this portrait of Canadian LPGA player Alena Sharp. Logan added another first place in the Multimedia category, along with his SCOREGolf team of: Andrew Foscarinand Brian Bileski. To top of his night's winnings, Logan also notched a Runner-Up prize in the Feature category for this poignant piece: "Soul Savers,"that explored and handled with care the topic of mental health awareness and suicide prevention.

Lorne Rubenstein was another two-time winner. The Canadian Golf Hall of Famer, and recent recipient of a Lifetime Achievement Award in Journalism from the PGA of America, took home First Place in the Column category with his piece, "Rockin' in the Golf World," - an ode to Canadian musician Neil Young for SCOREGolf.com. Rubenstein also notched an Honourable Mention in the Travel category for his feature on his hometown "My Toronto," for The Met Golfer magazine.

The final two-time winner in the writing portion of the awards was Robert Thompson. He won first place in the Feature category for his piece "After the Abbey," published in SCOREGolf magazine; the story examined the future of the RBC Canadian Open and asked questions about what might happen when Glen Abbey is no longer available as a host venue. Thompson added a Runner-Up in the Profile category for his piece, "A Doctorate in Golf," also published in SCOREGolf.

Ted McIntyre took First Place in the Travel category for this piece, "King of the Castle," published by travelinggolfer.net that showcased the breathtaking beauty of the Fairmont Le Manoir Richelieu near Quebec City.

In the Photo (Landscape) category, Chris Fry took the top two spots for a pair of breathtaking pictures of Cabot Cliffs, published on pgaofcanada.com. In the Photo (Action) category, perennial winner Bernard Brault took First Place with a shot of Brooke Henderson for GolfCanada.ca. 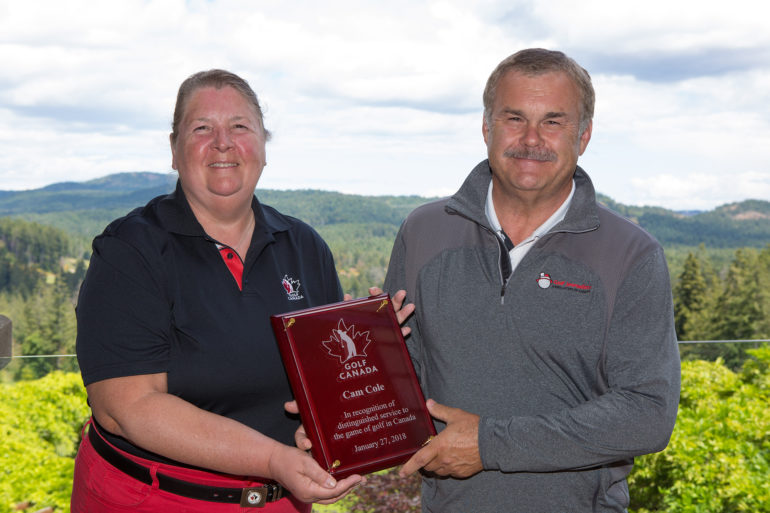